Discover the most spectacular waterfalls in the Southern Highlands. Fly over the steep canyons visiting Carrington, Belmore, Fitzroy and Gerringong Falls. See the rain forest, cliff faces, gorges and chasms of the Great Dividing Range.

After take off from the Illawarra Regional Airport and as we track towards the escarpment of the Great Dividing Range, keep a lookout for the tree top walking platform and viewing tower of the Illawarra Fly. Give a wave to the tourists as you rise up and over the escarpment  ridgeline to reveal the mountain top plateau of the Budderoo National Park.

Its worth taking a look toward the coastline at this point. The ocean and beaches provide a stunning backdrop contrasting in mood and colour when compared to the infinite expanse of eucalyptus stretching out below. Turning south we continue to follow the rocky cliff edges of the Great Dividing Range towards Jamberoo mountain and the ancient bushlands of Barren Grounds Nature Reserve.

Flying over Cooks Nose walking track, next on the itinerary is the beautiful Gerringong Falls, a 180m vertical drop as the Gerringong Creek plummets over the cliff edge and down onto the rocky riverbed below. Visiting the falls is a must for the avid and intrepid hiker. But if you want to venture to the valley below the falls then be prepared for a long day out trying to find the “secret passage” to the bottom. Much better to sit back in your seat in the comfort of your helicopter and take some photo’s from overhead instead.

From Gerringong Falls we fly direct over the historic settlement of Carrington Falls to the actual falls themselves. The area was significant l ocally as part of the early timber industry with hardwood  such as eucalyptus felled and used for building houses in the area.

From the air, Carrington Falls is formidable. The top is about 550 meters above sea level and the pool at the base is 160m below. The dramatic chasm the falls has created is very narrow with sheer cliff walls on either side. Whether standing on the ground at the lookout overlooking the falls or sitting in your helicopter seat, looking down from the air you’ll be impressed by one of natures marvels.

The area is popular with tourists, well known not only for the twin streams that tumble over its precipice to make Carrington Falls, but also for the swimming lagoons a couple of hundred meters upstream. The Blue Pool particularly, is very popular in the summer months for locals wanting to cool off. The creek changes levels at this  point creating a 5 meter high waterfall which is perfect to stand under on a hot day.

From Carrington Falls we then follow the Upper Kangaroo Valley River, tracking south towards the village of Kangaroo Valley.  From the base of the falls, the narrow gorge widens into a lush green valley with rolling foothills and open fields. The Upper Kangaroo Valley area is home to historic homesteads and communities and also includes the award winning Yarrawa Estate Vineyard. No stopping for a tipple today though.

Formerly know as Osborne, Kangaroo Valley village was first settled in 1817. The first recorded sighting of the valley –  other than by the aboriginal Wodi Wodi tribe who trod the tracks of the valley for at least 20 thousand years previously – was by the surveyor/explorer George Evans in 1812 who declared the valley as a sight that “no painter could beautify.”

The felling and exporting of cedar trees quickly became the main industry in Kangaroo Valley  but in modern times it is a quaint village renowned for its arts and craft shops, coffee, devonshire teas and for lunch and liquid refreshment in the grounds of the Friendly Inn pub. We’ll be observing from above on this trip though, but on another day and another occasion, we’d be happy to land at the Friendly Inn to partake of their excellent lunch menu.

As the helicopter tracks towards Fitzroy Falls, keep a lookout for Kangaroo Valleys most iconic tourist attraction; the Hampden Bridge. Popular to swim under in the summer months and the starting point for kayak adventures up and down the Kangaroo River, the bridge is a 77m long iron and wooden suspension  bridge opened to traffic back in 1898 and named after Lord Hampden – Governer of NSW at the time.

Fitzroy Falls is the centrepiece attraction of Morton National Park. At the head of Yarrunga Creek, it is a plunge waterfall of 80m in height. The panoramic views of the endless miles of eucalyptus stretching out to the southern horizon, and the mountain escarpment and cliff faces as we approach the falls from its river valley, are all truly spectacular and well worth the anticipation. We hope you brought your camera along for the flight. An hours drive from Wollongong but only 20 minutes by helicopter, by far the best view of the falls is from the air.

The water flowing into the Yarrunga Creek is now controlled by the engineering marvel of the Fitzroy Falls Reservoir. As you rise up and over Fitzroy Falls you’ll see it’s huge expanse as well as the incredible man-made canals feeding water off and down to the bottom of the mountain  range to the Bendeela and Kangaroo Valley Power Stations. The Reservoir also connects to the Wingecarribee Reservoir and then onto the Avon, Nepean and Warragamba dams to supply fresh water to Sydney and its surrounds.

As we leave Fitzroy Falls and Fitzroy Reservoir behind the next location on our “full to the brim” itinerary is Belmore Falls. Meanwhile, from your viewpoint up and above the Southern Highlands of NSW, you can see to the horizon in every direction; endless aussie bush in one direction, green rolling fields in the other and all the while the ever present coastline where the Illawarra meets with the Pacific Ocean.

As we approach Belmore Falls, you will see that it is quite different in that it is a 3 tiered waterfall. The height of the falls ranges from 77m to 130m in height as the Barrengarry Creek tumbles over each precipice. There is actually a river ford for motor vehicles to cross at the top and a lookout right at the waterfalls lip, but approaching from the air, along the gorge and up to the falls is definitely the rock star way to see this spectacular natural wonder.

From Belmore Falls we start to meander back towards base taking a diversion over Macquarie Pass National Park. The pass itself is one of the few traffic routes connecting inland NSW to the Illawarra. It is believed the pass was created based on an old traditional tribal path used by
the local  Wodi Wodi aborigines. The mountain pass cuts through ancient rainforest and in many locations, after seasonal rainfalls, the  waterfalls and flowing creeks consume the mountain pass making it very hard and dangerous to drive through. All part of the fun for life in the Illawarra.

As you fly overhead the national park, just about visible amongst the rainforrest, the eucalyptus trees, the kapoks and the strangler figs is the tumbling Macquarie Rivulet. There are some glorious waterholes found here which have been carved into the sandstone by the waterfalls over hundreds and thousands of years. Not that well known, even amongst the locals, the area is becoming increasingly popular due to the canyoning tours which occasionally swim, float and jump their way down the pools, chasms and waterfalls.

As we continue back to base overflying Calderwood Valley and Marshall Mount the full majesty of the Illawarra again stretches out before us. A land trapped between the mountains and the sea and home to those of us lucky enough to live here. 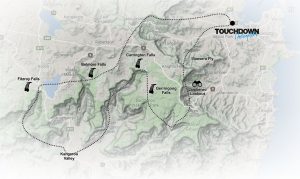