Within minutes of departure you will be flying over the pristine sandy beaches of Australia’s South Coast; from Wollongong Harbour in the south to the Seacliff Bridge in the North. And always against the ever present backdrop of the Great Dividing Range

Keep a lookout for those at work and play both in the ocean and on the shoreline. From swimmers at Austimer and Thirroul Beaches to surfers at Bellambi Point, sailing yachts and fishing trawlers at Wollongong Harbour and even dolphins and whales. The Illawarra is teaming with visitors from far and wide who just can’t get enough of our beautiful coastline.

Even before you clear the grounds of the heliport you’ll already be able to see the lighthouse at Flagstaff Point and the coastline beyond. On a clear day you can see all the way to Jibbon Point in the Royal National Park which is only 15kms from Sydney International Airport

Climbing out of the heliport to a height of about 1000ft, Wollongong City Beach will be underneath, a 3km stretch of white sand that is one of The ‘Gong’s most popular beaches for both swimmer and surfers alike.  As we continue to fly along City Beach, if you’ve ever wanted to see the home of the St George Illawarra Dragons at WIN Stadium from the air then your wish is about to come true.

Only minutes after departure, you’ll  be flying over the coast looking down at the beating heart of The ‘Gong – Wollongong Harbour and the Blue Mile connecting it to North Beach. A working harbour with fishing trawlers regularly departing, arriving and unloading but also with cafe’s, restaurants, walking paths, cycles paths and coffee shops for the connoisseur; the Harbour is a tourist mecca for visitors to the area. You’ll see it from the air and only a 5 minute drive from our heliport will get you amongst it all when you are back on the ground.

As you fly further north up the coast towards the Seacliff Bridge, the mountains of the Illawarra Escarpment converge with the coastline to make the view even that much more spectacular. Watch out for the popular beaches of Thirroul and Austinmer on the way as well as The Scarborough Hotel – a pub with one of the most amazing beer gardens, sitting on top of a cliff 80m above sea level.

With so much to see make sure you  are ready for the amazing Seacliff Bridge. Named in a competition by an 11 year old local primary school student and gaining international recognition as one of the drawcard attractions for visitors to the area, its expanse can only truly be appreciated from the air. Now a part of the Grand Pacific Drive, The Seacliff Bridge is technically a balanced cantilever design placed just far enough out over the rockpools and beaches to prevent the crumbling escarpment from putting dents in the roofs of passing cars.

And last on the itinerary for your coastal flight is Bald Hill, presiding over Wollongong’s most northern suburb of Stanwell Park. Bald by name and bald by nature it is the perfect launching spot for the myriad hangliders and paragliders that rise aloft and then land  on the beach below throughout the year.

The return flight back to base will give you a chance to take a closer look at the Illawarra Escarpment. You’ll fly by the tourist lookouts at The Southern Gateway Centre at the top of Bulli Pass as well as on the top of Mount Keira, 464m about sea level, before descending back to our base at Wollongong Heliport. 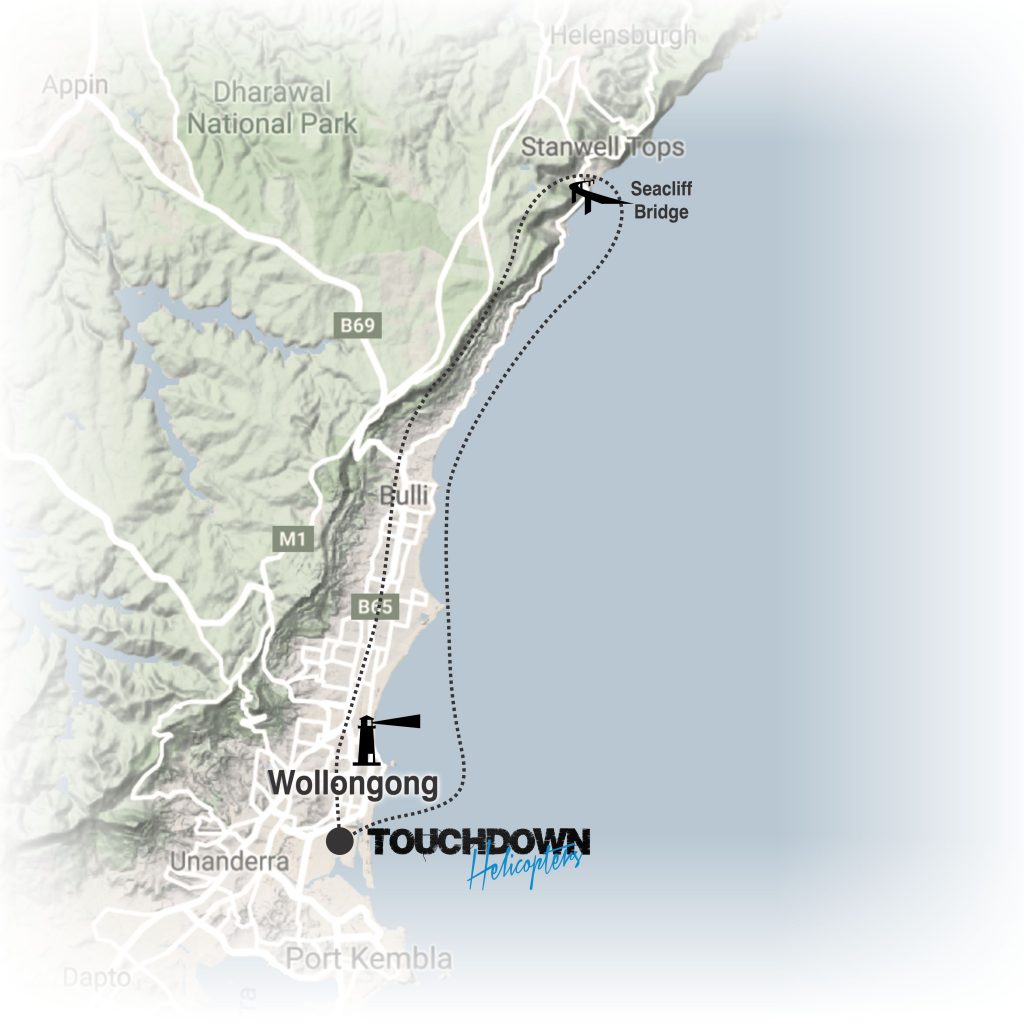